Apply Now
Get A Quote

Zero money down, low monthly payments, the best wheels in the world… What are you waiting for?

Not everyone has cash in hand to buy quality off-road equipment. For the majority of us off-roaders, we have two basic options:

Depending on your specific needs, goals, and desires, either option could be right for you. However, for those of you who choose the latter, you definitely should know a bit about what Off-Road Rim Financing can do for you.

We do things a bit differently here. Unlike most providers of tire and wheel financing, when you finance through us, you get a few unique benefits:

We want to make it as easy and affordable as possible for you to get the truck, SUV, or jeep components that you need to achieve your particular goals. Check out what wheel and tire brands you can choose from today!

The Joy of Off-Roading

With all the perfectly straight, smooth roads in America, regular commuters generally are able to get from point A to point B with little effort or thought. It’s the modern day equivalent of riding a donkey to work and back every day. It’s reliable, and there aren’t going to be too many unexpected occurrences that require you to pay immediate, close attention. Off-road trucking… well, that’s no donkey! It’s more like riding a wild stallion, requiring fast reflexes, adaptability, and ingenuity to keep things moving! Though lifted trucks have been around for decades, they were originally used primarily for solving real-world problems, such moving equipment around mountains or in the arctic. Nowadays, however, lifted trucks with high-quality rim and wheel sets are everywhere. Off-road enthusiasts abound, especially in the American West. Yet, did you know this is a relatively recent trend? In this post, we will look at some of the history of off-road trucking while focusing on why it is just so amazing.

If you want to prepare your truck for off-roading, Off-Road Truck Financing can help make your dream a reality. We offer off-road truck upgrade financing plans customizable for everyone’s individual needs. With Off-Road Rim Financing, you can get the truck upgrades you’ve always wanted without having to sacrifice the ability to get the quality parts you desire. When you choose to finance with Off-Road Truck Financing, you enjoy:

A Brief History of Off-Roading

Off-road vehicles were first developed in Russia in the early 1900s, designed specifically for soft driving conditions like snow and dirt. Instead of having interlocking metal tires, these vehicles used a line of rubber track along a conveyor, kind of like a tank or a snowmobile. During the 1920s, some of these vehicles were used to cross the Sahara Desert, which got quite a lot of publicity and led to greater interest in off-road vehicles.

Due to the success of these early off-road vehicles, when WWII was underway, all armies involved relied on off-road vehicles for transporting supplies and equipment for going through rough terrain. These early days of off-roading are almost entirely about practicality. Off-roading technology advanced rapidly during the war, due to the investment in such things for the war effort. One such development was the implementation of a lifted suspension, which is the foundation of the lifted trucks we know and love today .

After WWII, off-road truck manufacturing moved into the private sector. The first use they were put to was for freight trucking across the nation. With the construction of the interstate highway system after the war, authorized by President Eisenhower in 1956, the transportation system of America was transformed. To construct all these new highways, large pieces of equipment needed to be moved, and thus the value of off-road vehicles for getting the equipment into what was often quite tough terrain. These vehicles helped accelerate the construction process during the post-WWII economic boom. 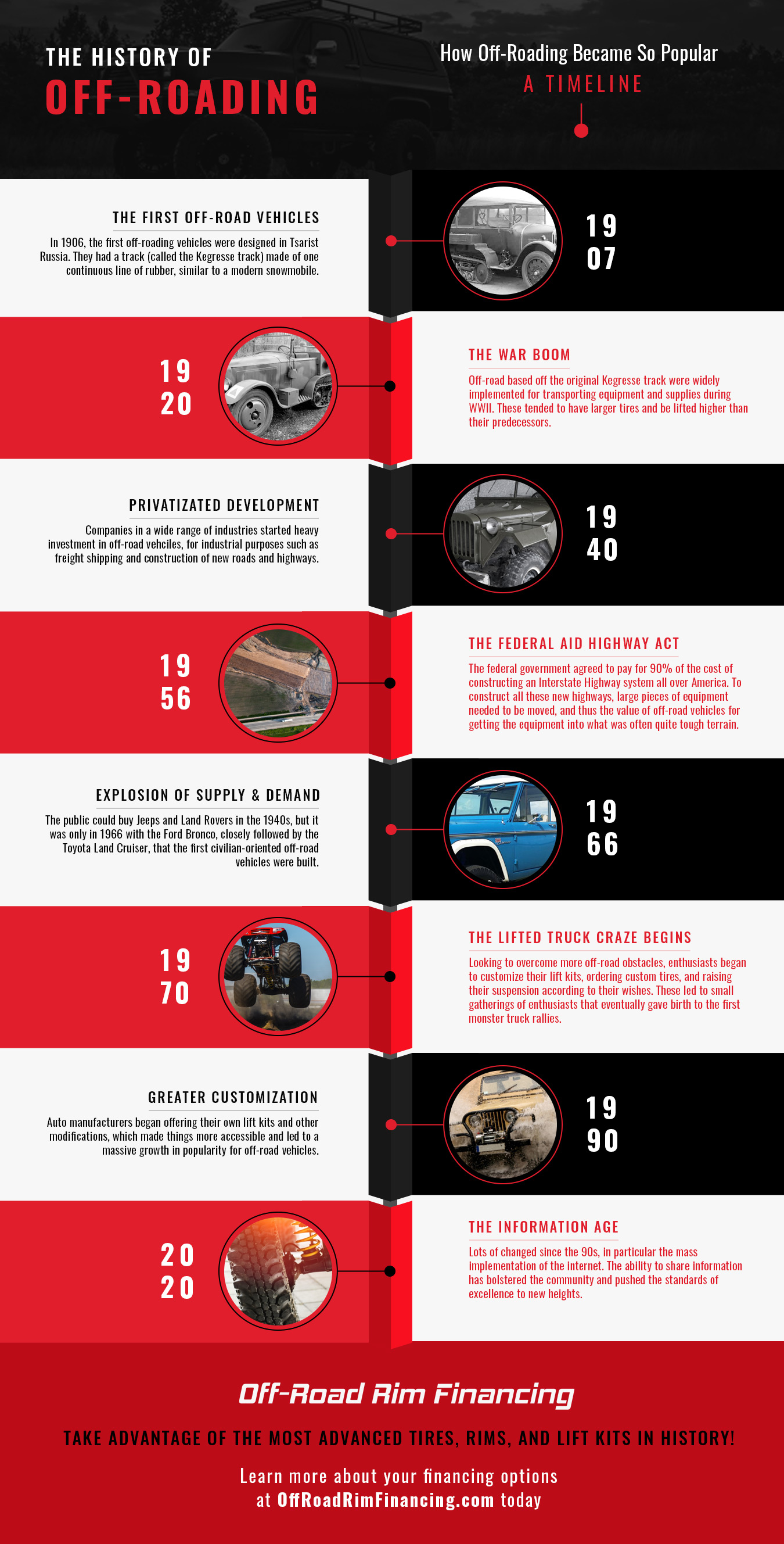 From Industrial to
Consumer Use

Companies like Jeep and Land Rover first became available to the public in the 1940s, filling the niche of military-style vehicles for people who like to go on vacation, camping, hunters, etc. These models tended to be very similar to the vehicles used during the war. It was only in 1966 with the Ford Bronco, closely followed by the Toyota Land Cruiser, that the first civilian-oriented off-road vehicles were built.

One of the main things that has continued to transform the off-roading enthusiast community was the mass implementation of the internet. The ability to share information, videos, and inspiration has bolstered the community and pushed it to develop even further and pushing the standards of quality higher. The internet has also made it possible for more manufacturers to get involved and manufacture more niche or custom lift kits, rims, tires, breaks, and more. It seems that every year there are better and better products available.

The craze for lifted trucks didn’t begin until the 1970s. Before this point, off-road truck enthusiasts would be forced to rely on the parts that came with their vehicles from the manufacturers. Looking to overcome more off-road obstacles, enthusiasts began to customize their lift kits, ordering custom tires and raising their suspension according to their wishes. The enthusiasm surrounding lifted trucks then led to people getting together, appreciating one another’s vehicles, and learning new and improved methods for upgrading. These small gatherings slowly coalesced into regular events, which then gave birth to the first monster truck rallies.

From the early 70s to the late 80s, there was a devoted following of off-road truck enthusiasts, but the phenomena didn’t go mainstream until the 1990s when drivers began experimenting with different lifted trucks and more auto manufacturers were producing accessories. Companies began offering their own lift kits, which made things more accessible and led to an explosion in popularity for off-road vehicles. The more people used lifted trucks, the more investment was put into improving features and upgrading possibilities. New lifting techniques and materials for rims have since then been developed to further enhance a driver’s ability to deal with even some of the most extreme terrain out there.

The Love of No Road

Off-roading is about the challenge just as much as it is about the fun. Whether you are into dune bashing, off-road racing, mudding, green laning, rock crawling, or any other type of off-road trucking, it can be an extremely rewarding experience. Off-roading is a hobby that requires different skills than other types of performance driving. The challenge of driving over rough terrain, of setting up your truck to face new challenges, and spending time talking about trucks with other enthusiasts are all experiences many off-road truck enthusiasts get a great deal of satisfaction out of. If you would like to enjoy the satisfaction of owning a suped-up off-road truck, make sure you get the upgrades best suited to your goals. Don’t settle for low-quality products just because you don’t have cash on hand. Off-Road Rim Financing offers a variety of financing plans to help you get your truck upgrades today, without having to wait for months or even years as you save up.

Get Your Free Quote!

By settling for lower-quality upgrades, you are putting your truck at risk of getting stuck in the mud or becoming more easily damaged during off-road adventures. You owe it to yourself and to your truck to not compromise on quality. So, if you’re thinking about upgrading your rims, lift set, tires, or more, don’t put it off and then buy low-quality projects; reach out to Off-Road Rim Financing for help! We will be able to provide you a payment plan that works within your budget. Reach out to us today and we’ll walk you through your options.

Stay Safe On & Off the Road with New Tires

It’s impossible to understate the importance of quality tires when it comes to the safety of your truck, SUV, or jeep. Your tires are the sole part of your vehicle that touches the ground, and they carry you at all different speeds and through all different types of terrains — from paved roads to rough trails and beyond. Your tires are built to withstand thousands of miles of wear and tear… but they aren’t made to last forever. What is more: their lifespan can rapidly decrease over time if you are putting them to hard use.

Worn down tires can put you and whoever else is in the vehicle with you at risk, not to mention increasing the chances that you get stuck or in an accident when driving on more uneven or wet terrain. Make sure you don’t compromise with tires that put you and everyone else driving with you at risk. When it comes to upgrading your vehicle, quality should be a priority.

If your tires are looking a bit worn down or you are planning on doing more off-roading in your truck, make sure you have the tires and wheels you need to do so effectively and safely. You’ll have more fun and will be at less risk for damages. Off-Road Rim Financing provides you the ability to get the tires you need even when you don’t have cash in hand or a good credit score. We have you covered

Find Out What You Qualify For Today!

Don't Take Our Word For It

Check out the testimonials from our happy customers below